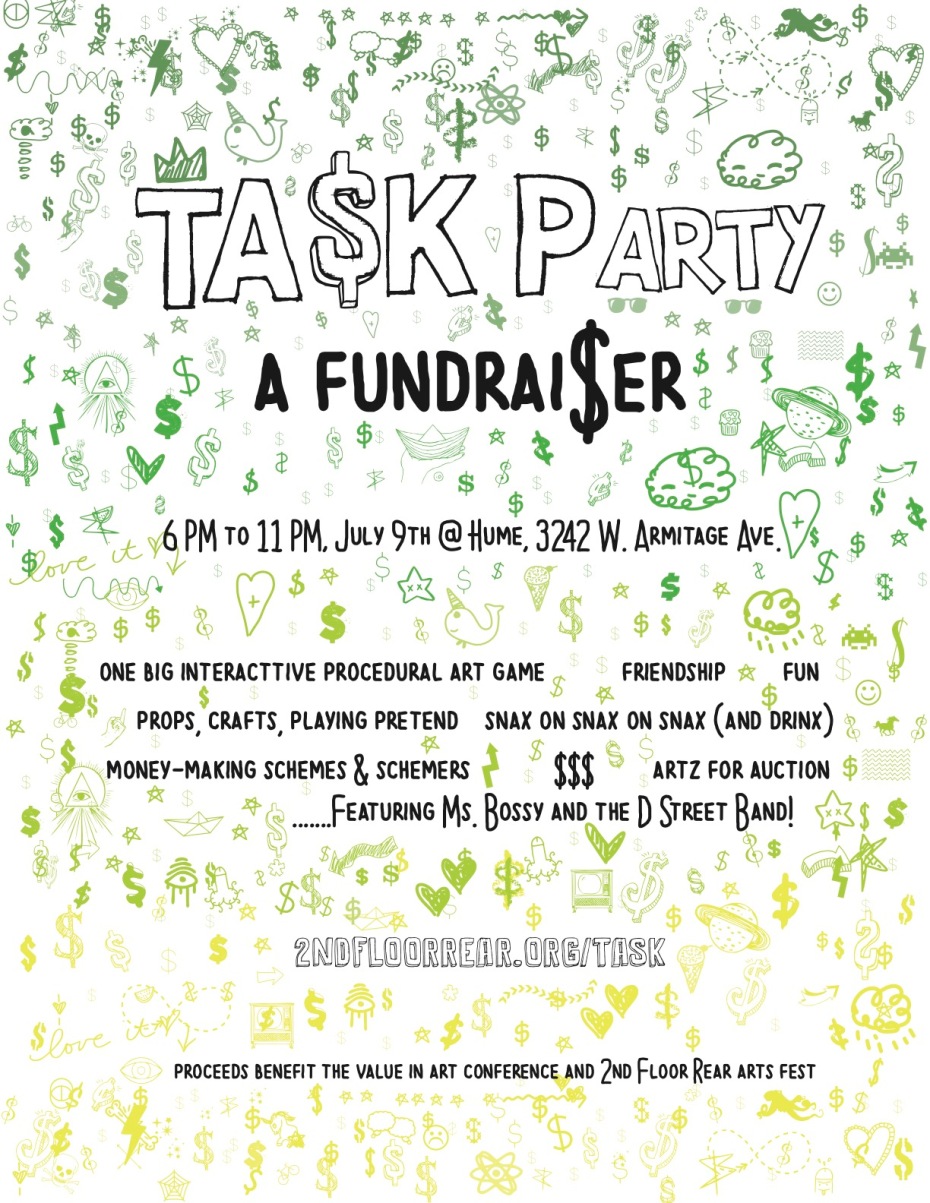 Imagine an improv troupe rewriting the rules of Monopoly. Now add a room full of craft supplies, W.A.G.E.’s wo/manifesto, your friends, artwork for auction, glitter, snacks, glitter, a band, glitter, and homegrown arts organizations that need your $$$. That’s what’s up with TA$K Party: A Fundrai$er, the art game where you make it rain.

TA$K Party: A Fundrai$er will utilize the procedural game TASK to provoke questions about the value of creative labor, while creatively coercing participants to labor and give $$$ to two $$$-worthy causes: the upcoming Art + Value conference and 2nd Floor Rear 2017, a sixth annual festival of art in alternative spaces.

$10 suggested donation to enter and just hang out

Conceived by multimedia artist Oliver Herring, TASK is an improvisatory art event in which participants use provided materials to carry out a set of instructions. All TASK events rely on the same basic infrastructure: a designated area, a variety of props and materials, and the participation of people who agree to follow two simple, procedural rules: 1) to pull a task from the “TASK pool,” and, interpreting it any which way he or she wants, perform the task, and, 2) to write a new task on a piece of paper and add it to the “TASK pool.”

TASK is all about  interpretation, improvisation, and creativity. TASK participants may be called upon to do something specific, like “Make a list of 20 words that describe the weather,” something physical, like “Scream silently, using your whole body,” something craftsy, like “Make someone a beautiful hat,” or something super open-ended, like “Change everything.” As tasks are performed, the provided props and materials transform, merge, and build upon one another, turning the TASK environment into a collective art installation.

That’s regular TASK. With TA$K Party: A Fundrai$er, there are a few twists:

4) Players may spend TA$K TOKEN$ at the $TORE. The $TORE sells special TA$K supplies, TA$K costumes, and stuff you can use in the real world—gift certificates, artist-made limited editions, and artwork.

5) At the end of the night, the TA$K MA$TER$ will count each player’s TA$K TOKEN$. The wealthiest 1% of players will get special prizes. Like really special prizes. God ble$$ America.

In Oliver Herring’s words, “TASK’s open-ended, participatory structure creates almost unlimited opportunities for a group of people to interact with one another and their environment. TASKs’ flow and momentum depend on the tasks written and interpreted by it’s participants. In theory anything becomes possible. The continuous conception and interpretation of tasks is both chaotic and purpose driven. It is a complex, ever shifting environment of people who connect with one another through what is around them. It is also a platform for people to express and test their own ideas in an environment without failure and success (TASK always is what it is) or any other preconceptions of what can or should be done with an idea or a material. People’s tasks become absorbed into other people’s tasks, objects generated from one task are recycled into someone else’s task without issues of ownership or permanence.”

TA$K Party: A Fundrai$er perverts TASK’s utopic environment by introducing currency and competition. If TASK is void of ownership and failure, TA$K makes both more pronounced by yoking TASK’s creative chaos to capital, encouraging financial speculation and precarity. (But don’t worry: TA$K is more Monopoly than casino. There will be rules and safeguards to ensure that TA$K is played responsibly, consensually, and collaboratively.) Ultimately, TA$K Party: A Fundrai$er will provide a framework for light-hearted creative play while provoking serious questions about the absurdity of arts economies and our complicity in maintaining the farce.

About the Art + Value conference:

Art + Value is a conference that will explore the ways in which artists and their work are valued in Chicago today. Leaning in to the haziness of the term ‘value’, panels will address monetary worth in terms of economic gain, personal meaning, and the intersection of both. Slated for November 2016, Art + Value will feature six roundtable and panel discussions hosted by artist-run spaces around the Avondale/Logan Square neighborhoods. Through this decentralized conference, we hope to open the door for Chicago artists to speak more confidently about the ways in which their work is valued, forge productive spaces for critical reflection and concrete skill-sharing, and become tenacious advocates for sustainable working conditions. Lean more at cornerchicago.com/art–value-conference.html.

Hume Chicago is an artist-led project space focused on serving the Humboldt Park and Logan Square communities through dynamic, accessible arts programming. Hume’s mission is to foster an inclusive, creative environment in which emerging Chicago artists and their neighbors can commune and engage. Learn more at humechicago.org.

Where’s that one thing?