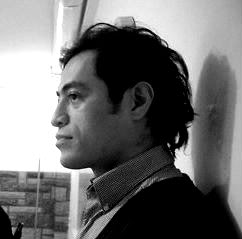 Jesus Gonzalez Flores is an interdisciplinary artist, and a freelance curator. He studied at Eastern Michigan University and The School of the Art Institute of Chicago. Gonzalez Flores has shown internationally and nationally including So Weit, die Zunkunft [SWDZ] (Vienna, Austria), Julius Cæsar (Chicago), The Institute of Contemporary Arts (Singapore, China), CUE Art Foundation (New York), and PERIGRINEPROGRAM (Chicago). Other recent projects include Mis Aventuras, Por Un Amor, and ADDS DONNA. This coming spring he is attending an Artist-in-Residence program at Joan Mitchell Center in New Orleans. He is a Gemini, married and plans to adopt.

Erin Delaney and Egon Schiele have been collaborative partners since 2013. Co-operating a live/work space on Pilsen’s 21st street called Eco, the pair has curated weekly music and performance shows for the duration of a year. Enthused by the fast pace of Do It Yourself arts community, Egon and Erin create installation works for local venues, are key players in the experimental punk band Daymaker, and facilitators of DIY community outreach meetings. The ambition of this pair is to facilitate a respectful and healthful community. Within Chicago’s South East side Erin and Egon have rooted an open door space that promotes Underground and Unnerving artworks, emphasizing the joy of coming together to create.

Where’s that one thing?